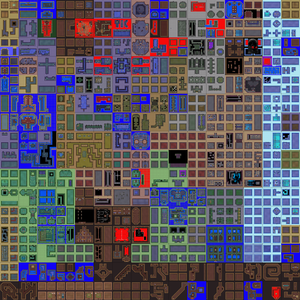 The EG Map
The EG Map, sometimes also called the Underworld map, is a map displaying the true arrangement of all the game's indoor rooms. In normal gameplay, the game hides the fact that all the rooms are on the same map. However, through using glitches, the organization and mechanics of the overall map become important to understand.

This map has a wealth of information regarding the mechanics of the EG Map. Here is a key: 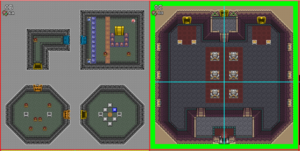 Two adjacent Supertiles on the EG Map. The right Supertile is a single large room, but the left one is divided into 4 Subtiles
The underworld is made up of a grid of 256 "Supertiles." Supertiles can be organized in a few different ways. They can be an entire room to itself, or it can be divided into smaller rooms called "Subtiles." There can be up to 4 Subtiles within a Supertile. 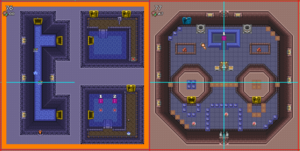 Two adjacent Supertiles on the EG Map. The right Supertile is a single large room. Every Supertile-sized room is made up of 4 quadrants. The left Supertile has 3 Subtiles -- two small rooms and a long room. The long room is divided into two quadrants.
Quadrants are invisible boundaries that divide Supertiles. The game tracks which quadrant Link is in within a Supertile and uses this data when Link transitions. Through Transition Corruption glitches, the game may regard Link as being in a different quadrant than he actually is, which can make transitions behave in unusual ways, or may even make quadrant boundaries behave like transitions.

EG Strength refers to a variable in the game's memory related to layer mechanics. The annotated map's border highlights show how different Supertiles influence this variable. Supertiles can actively write to this variable by setting Strong or Weak EG or they can leave the variable alone entirely. Link needs to have Strong EG set in order to enter EG with any method or in order to exit EG with a Weirdshot. This means if the player wants to enter EG, the last time this variable has been set needs to be from a room that sets Strong EG.

EG2 Map
Looking at the map above, you may have noticed that it's missing quite a few rooms in the game. This is because that's the primary underworld map, which houses every room in every dungeon as well as every cave/house with multiple exits to the overworld. But what of the caves and houses with single exits to the overworld? These are on a separate map that we call the EG2 Map. This map is smaller and has a few mechanical differences compared to the primary EG map.
Retrieved from "http://alttp-wiki.net/index.php?title=EG_Map&oldid=3789"