And watch Xelna do it fast.

Notice that he talks to the NPC from as high as possible, holds up-left after the dialog and then uses the item switch to confirm his position. After the warp he does not need to move at all to dig. Link ALWAYS digs to the right, unless you are holding < on the D-pad. 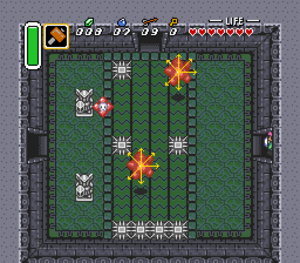 Gibos can move in 6 directions

Enter the room, avoid getting slowed down by the Bastard Door, recognize the movement pattern of the lower Gibo and dodge as much as you have to. Using the item switch to bombs as a buffer is helpful, but there are also other opportunities to use that menu to consider.

If the bottom Gibo moves...

Another way to deal with this room is to take the upper route, which requires you to delay your dash to not run into the Fire Fairy. Holding up when entering and slashing once works well as a buffer. This time we're looking at the top Gibo and the pause buffer is especially useful to recognize the special cases.

South-west movement means you have to wait. File

Sometimes the bottom guy moves into your way, which is still an OK pattern if you react quickly. File

If you have beams and slash early enough AND the bottom guy moves NE, you actually kill him thanks to the spike. File 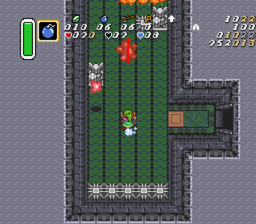 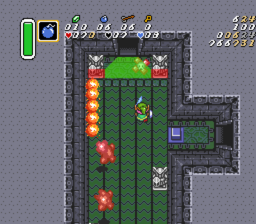 Don't touch the d-pad when you start your first dash to increase the chance of landing in the right position, that allows you to dash inbetween the spikes. The first Gibo will only be in your way if it moves straight north or south. The door at the end of the hallway is very generous when it comes to dashing through: As long as you are at least one pixel away from the statues left or right, you will not bonk. This is another room in which the pause buffer to bombs can be helpful.

You can look at the distance between Link and the statues to aim your dash into the door. File

Often it is worth taking an intentional hit for the invincibility, because it is easy to take a lot more damage when lingering in the room. File

To get boosted north like this, you need to walk down-left into the upper half of the spike. File

Final opportunity to use the item switch to bombs as a buffer.

All enemies are easily avoided. File

Only case where you need to deal with a Buzz. File

Hammerdashing is the fastest strat by 10-15 frames when done optimally. Slashing at enemies can cause a lot of lag in this room, especially with beams.

Hold up-right to start the dash. Kills the Stalfos no matter the RNG. File

Hold up to walk inside the door frame, then press right to nudge against the corner, if you want to make this easier. The Stalfos can get in your way. File

You pick up Flute and Titan's Mitt in this segment.