Difference between revisions of "Tower of Hera"

Safest strategy on this screen. Be sure to align with the right wall after hopping down to avoid any cacti. Dash to the right when you get to the top of the mouth of the octorok pattern in the ground of the desert area. File

Slightly faster strategy than the safe one. Be sure to lift the rock and ledgehop in the correct way (see below). At the Sandman, slash and hold sword to the right and dash. File

Again just a slightly faster strategy than the one before. Do the same rock lift and ledgehop as the Sandman strat and be sure not to move down any before starting to dash. This will make sure that you're on a good grid for hitting a 2 pixel window between the two cacti. This will require a frame perfect dash cancel and risks taking damage from the cacti if you miss, so this strat is not recommended for newer players. File

To land flush with the left wall after ledgehopping, there is a small trick. First lift the rock as you can see on the picture below and get in a position so that Link will be aligned with the top right rock on his dash. This means either being on the exact coordinate as the bottom of the rock or nudging it slightly on your dash. 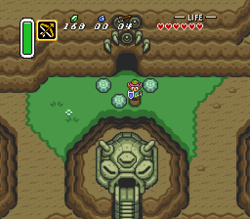 If you did everything correctly, you should get a short hop and land like so: 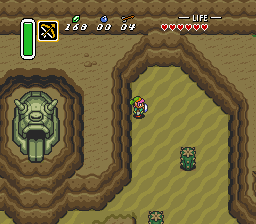 If not done correctly: 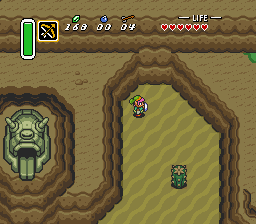 In case you aren't doing fake flippers, there is a lag reduction strat on the screen west of Hyrule Castle:

Easy stategy and nothing to explain about it really. File

Can make this a little easier by walking up against the switch and slashing it then moving just directly left into position (at the cost of several frames). You must dash very quickly after throwing the boomerang to the right for this strat to work. File

This boomerang dash isn't as tricky to execute as the same frame dpad ones (such as the one in the Tile Room seen below). Just make sure you're holding ^> at the time the Itemdash charge is started and let go of ^> before the dash begins. The main issue with this strat is that Link will be dashing without his sword out, which makes this strat more vulnerable to the mini-moldorm than the other 2 strats are. File

There are a few options for this room.

The easiest thing to do is just hit the switch and survive the tiles. In the following room, you will lose just a bit of time hitting the switch to proceed.

A slightly better strategy (that saves around 20 frames) uses a boomerang dash to have the orange pegs already down in the following room. The two ways of doing this are shown here:

Stand around the spot shown in the video, face right, and press v+Y+A all on the same frame. Release v before Link starts dashing. This is easier to execute than the diagonal throw because it uses one less input. However, if you mistime it, you can hit the switch without being able to dash onto the pegs, and every time you hit the switch, the game is paused for 20 frames while the pegs are flipped. File

Stand around the spot shown in the video, face right, and press <+v+Y+A all on the same frame. Release v and < before Link starts dashing. This adds another dpad input compared to the down throw, making it harder to execute. But if you stand in the spot shown in the video, the boomerang will miss the switch unless Link successfully dashes across the room. This removes the risk of losing time due to accidental switch hits. Additionally, from the position you land on the pegs, you can press v to snap Link up to the exact coordinate of the door, automatically removing any nudges when you go to leave the room. File

Just do as shown. Sometimes you'll need to lure the middle beetle some to get it in a good position to hit in the pit. When carrying the pot for the final beetle make sure to walk along the edge of the pit to regain Link's normal movement speed (ordinarily he moves slower while carrying an object). File

Cancel stairlag and move v> to cut the corner of the top pit before going into v. There's some randomness about the slash on the beetle + switch that you have to get a feel for. Be sure you're paying attention to how he's moving. Then you need to pay attention to the top beetle while moving to the pots. Sometimes he will be to the right of the switch as he is here, but other times he will be directly above it or to the left of it. You'll have to adjust your throws depending on its movement. Use the same technique as the Wak strat for killing the final beetle. File

To get the Moon Pearl as early as possible we will use a bomb jump. The main strategies for this are shown below as well as pictures of the relevant visual cues. Usually, you'll need to be within 2 pixels of the pit for a bomb jump like this to work. However, since there's a nearby wall, we can bonk to expand that pixel window to 6, making the trick much easier.

Easiest version of the bomb jump. Approach the pit and do a dash turn to face down without moving down. Link must be within 6 pixels of the gap (see visual cue below). Plant the bomb and then bonk the wall so that Link is in his bonk animation while the bomb is exploding. File

Slightly faster strategy than the safe one. Hold <^ against the top wall until more than half of Link is past the corner, then plant the bomb. Care must be taken to ensure that you move far enough away from the bomb to not pick it up when trying to dash. This also has a 6 pixel window due to bonking. File

The fastest bomb jump strategy, but also the hardest. The bomb can be planted as Link clears the tile where the top pot was. This is very early and risky though, so you can opt to plant the bomb a little later for more time to position Link. The bomb must be thrown against the wall and then Link needs to be one 1 of the 2 closest pixels to the gap while the bomb explodes. A pause buffer to the Bow (which is the next item needed in the speedrun) can be used to make getting Link on the correct position easier. File

For not dashing you must be within 2 pixels of the pit for the explosion to push Link across.

Click pictures to enlarge. Keep in mind that Link's shadow is a pixel lower if he's facing to the left or right compared to if he's facing up or down. Also note that even if you're doing a strat that allows you to bonk, if you happen to land on one of these 2 pixels, it's faster to not bonk since Link doesn't move across the pit until he's landed from the bonk. If he's just standing, he'll get boosted across immediately.

For bonking, be on or above the pixel shown here: 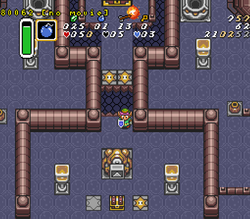 6px away from pit

Cancel stairlag and move down and get yourself in a position to dash through above the blue bumper. You have a 4 pixel window (Y-axis, X-axis doesn't matter) to work with to get the dash successfully. Some players like to hold their sword out here for an easier alignment. The working pixels are shown below. If you're above the 1st pixel, you will fall into the pit on your dash to the right. If you're below the 4th pixel, Link will hit the bumper on the dash to the right.

You pick up Magic Mirror and Moon Pearl in this dungeon.