An EG Kick is a trick that forces Link in-bounds from EG by visiting specific Supertiles on the EG Map. When Link enters a Supertile with a movable wall (ie. Desert Torches, Mire Torches, PoD Eye Statue) or a room with dynamic conveyor belts (ie. Mothula's Room, Ice Palace Conveyor Room), he will immediately be popped out of EG. This can be a useful way to access such rooms, but it can also be used to access rooms adjacent to those Supertiles on the EG Map. 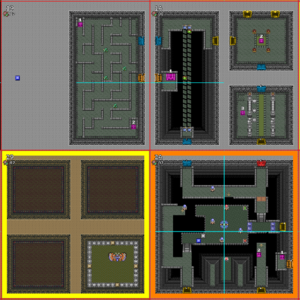 The relevant Supertiles for this trick. The player EGs to Bumper Beetles and enters Moth's tile to get kicked in-bounds to Dark Maze
This is a significant trick in many modern MG routes because of how quickly Hammer can be accessed from EG. Moth's Supertile is used to kick in-bounds one Supertile north, which is PoD's Dark Maze Room.

If you're coming from north of Bumper Beetles (typically this means you entered EG in Spec Rock Cave), you'll want to use these strats.