Swim without having the flippers.

It can be combined with Walk on Water.

Exclusive to version JP 1.0 only. That allows Link to swim without Flippers. Moving onto land will cause Link to jump out of the water and end Fake Flippers.

While performing this glitch, getting hit triggers the game to check if you have flippers, and try to place you out of the water where you last jumped in. If you entered from a different screen, this will cause an infinite scroll soft-lock. This has been changed in ALttPR and causes instant death.

There are three main categories on performing Fake Flippers.

Align yourself to the edge of a screen transition then jump into water while holding the direction into the transition. This will scroll the screen before Link can be booted out of the water giving him a swimming state.

The game allows Link to move for 8 frames in the water before it sends him out for not having flippers. In later versions of the game, the flippers are checked for every frame, and without them, Link cannot move. Since this code is not present in JP1.0, Link can move. It also just so happens that 8 frames is exactly how long you need to build up enough speed to start moving right. This means that despite the glitch technically having a larger window, the actual abuse of it is frame perfect. When moving west, the faster speed gain in this direction gives 1 more frame of leniency.

With a fairy in a bottle, jump into deep water and take a death (typically using a held bomb). The fairy will revive Link and put him into a swimming state.

This method prevents the splash effect from occurring when Link jumps into water by filling up all available ancilla slots. The splash effect starts the game's routine to boot Link out of the water, so if the splash never spawns the game will never try to kick Link out giving a fake flipper state.

The following table is a list of common setups to delete the splash ancilla to activate fake flippers.

The best use for this is to get to the whirlpools that can be used to quickly warp to a different location on the map.

The most common application to use fake flippers is in the Any% (NMG, No S+Q) category when traveling from Desert Palace to Death Mountain.

Here is a picture demonstrating how to easily line up the glitch. 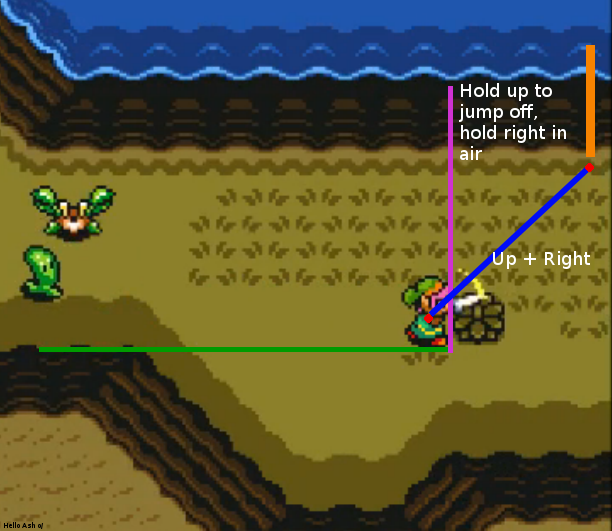 Use the wall (green line) to line up Link perfectly with the bush, then once touching the bush, slash against it and hold B to hold your sword out. Use the sword slash to buffer a direction change to ^> (blue line). This will line Link up perfectly (one pixel) from the edge of the screen. Quick Hop into the water (orange line) and hold right while in the air to transition the screen.