Deathhole is a Major Glitch to abuse the mechanics of death, falling, and screen transitions at the same time.

When Link falls into a room and dies at the same time, the game will believe Link has transitioned even though he is not physically moved to the room below. This makes the glitch a class of Transition Corrpution. Data from the room below will be loaded into Link's current room, changing chest contents, pit destinations, key doors, transition destinations, etc.

The fairy revive that plays out is the result of a submode conflict, which is often a component of TC glitches. The game mode address at $0010-0011 is set to 07 00 in normal indoors gameplay, and when Link falls in a pit, that transition will change this value to 07 07. Meanwhile when Link dies the game mode will be 12 01, with the value at $0011 incrementing through various phases in the death animation. If the player dies and falls at the same time though, the death will start at 12 08, and the incrementing will take the player through 12 0B, which is the fairy revive submode.

If the player hasn't died or opened the map at any point in the run, the screen will be black until Link transitions.

Deathhole is a glitch unique to the Japanese 1.0 version.

This is a common technique in MG Speedruns for a couple of reasons:

This application is currently used in All Bosses No EG. This is a way to access PoD's Big Key without needing to unlock the door leading to it.

This is an important trick in most modern MG Runs that have to do All Dungeons. It allows the player to very quickly access Arrghus without the need for Flippers. 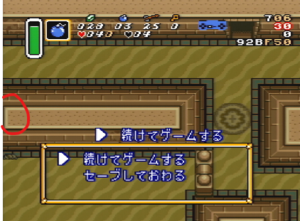 Visual cue for the dash cancel. I look at when the lighter brown part of the wall below first touches the left edge of the screen.
Retrieved from "http://alttp-wiki.net/index.php?title=Deathhole&oldid=3818"
Category: